Can’t Get Enough of . . .  is a new monthly feature here at The Book Nympho where we give you lists of books that are similar either by topic, genre, character types, etc. You can find new posts mid-month on Friday. 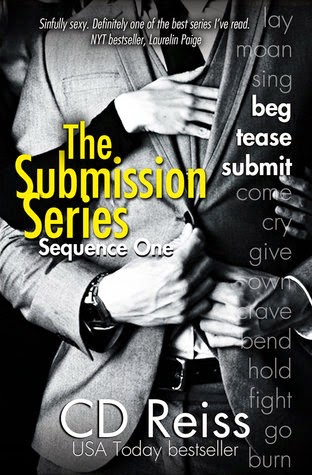 C.D. Reiss writing is outstanding and her Songs of Submission series feels very organic. Jonathan is the dom and he baby steps Monica into the world of play. I say the world of play because once it’s out there for Monica to know what he’s into he tells her that he is not into living the lifestyle but he likes to play. Which I understand it to mean he likes to keep it in the bedroom as much as possible. Even though his strong dom personality does cross over but he doesn’t expect her to be his “salve” as Monica fears.

Bondage Level: I’ve only listened to Beg, Tease and Submit (as one audio) and so far in the series the bondage is what I call light. Jonathan uses things to tie Monica’s hands and the tells her how he wants her. But he has not gotten too “forceful” with her. That may change.

Lorelei James’ Mastered series doesn’t deals with “bondage” per-say and has more to do with Shibari/Kinbaku rope play. Ronin is a rope master and slowly introduces the art form to Amery. Like Christian Grey, Ronin has a play room but it’s not a scary. LOL

One thing that the Mastered series has going for it over the other mentioned today is that in the latest release, Unraveled the relationship is about a Domme/sub. I really liked seeing the roles reserved, it was a first for me.

Bondage Level: Again I say it’s light in the series (so far). And the Dom/Sub level is very light.

What’s not hot about Russian bothers with mob ties? The first book, The Professional was heavier on the bondage and the second. But both have elements of kink in it.

Bondage Level: I feel like out of the three series, The Game Maker has a stronger bondage level as of right now.

are you into whips and chains or is light bondage more your reading style?

Do you read these romances for the kink or the emotional ride?

Nicole from Feed Your Fiction Addiction and Shannon from It Starts at Midnight are hosting the 2015 Discussion Challenge, and I’m taking part by linking-up my monthly Can’t Get Enough of . . . posts.